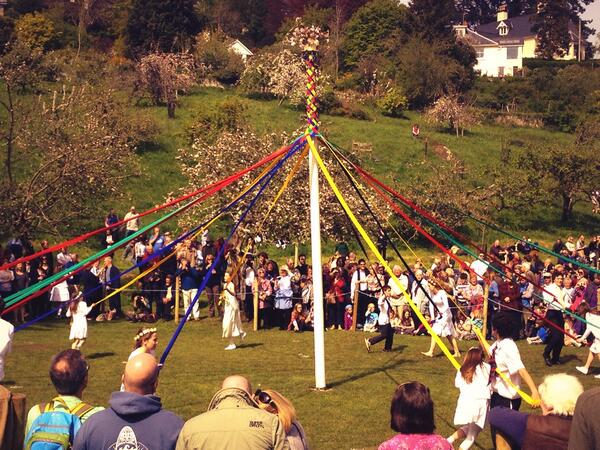 IF you’re looking for a traditional English May Day, you probably couldn’t beat Lustleigh’s celebrations on Saturday, May 2.

Spectacles include maypole dancing by the children of the village, a brass band playing and a display of Morris dancing.

The highlight will be a procession through the pretty village with the May Queen being crowned in the village orchard.

The fun begins at 1pm.

The Parade starts at 2:00pm 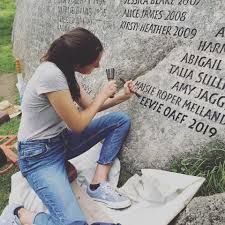 An excerpt from ‘Legendary Dartmoor’:

Today, probably the most famous May Queen celebrations can be found at Lustleigh. Here the May Day traditions had lapsed until in 1905 Cecil Torr revived them. They have been held on the first Saturday in May ever since and initially the ‘crowning’ took place on a hillside above Wreyland. Here there is a huge granite boulder where the ceremony took place, the boulder has inscribed upon it the names of all the May Queens up to 1954. Then the celebrations were moved to the Town Orchard where the Queen’s throne was erected on a rock. Like its predecessor this rock has the names of the all the May Queens inscribed on it from 1954 to 2000, the rock is known as the May Day Rock. In the May of 2000 a new throne was unveiled at the May Day celebrations. The throne was cut from granite from the nearby Blackingstone Quarry, it was designed by Doug Cooper and carved by Warren Pappas, on it is inscribed ‘MM’. The crowning celebration begins early in the morning when the ladies of the village make a grand canopy of flowers. Then early in the afternoon the Queen is escorted by four bearers who carry the canopy and a procession is led around the village. The Queen’s crown of fresh flowers is carried alongside the retinue. The procession then stops at the church steps where the queen is blessed by the rector and the village children sing songs. The May Queen is then escorted to ‘The Orchard’ where she is crowned on the May Day Rock and then the villagers dance around the May-pole. During the afternoon teas are served, brass bands play and Morris Dancers ‘clog’ their jigs and dances.

To read more of the History of Lustleigh May Day and see some historical photographs visit: http://www.lustleigh-society.org.uk/lustleigh-may-day-a-history/